How to get rid of condensation in double glazing 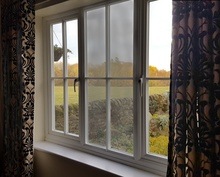 How to get rid of condensation in double glazing will vary in so much as it is generally assumed it is a cheaper and less messy to repair the unit rather than fit a replacement sealed unit. However as most sealed units fail one at a time rather than all at the same time it would more than likely be cost prohibitive to call out out a window repair company to clean the condensation from the cavity. It would be far better to replace it with a brand new made to measure double glazed unit.

To fully understand how you get Condensation on double glazing it is worth knowing how a insulated sealed double glazed  unit is made and what are the component parts. Double glazing is a very simple idea, you have two panes of glass with  an aluminium spacer bar seperating the glass thus creating a cavity. The spacer bar is in actual fact a hollow tube which is filled 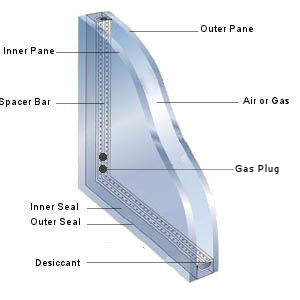 with silica-gel crystals. Once the spacer bar is sandwiched between the glass the perimieter is the filled with butyl sealant.

The silica-gel crystals soak up any moisture that is present before being sealed and the butyl sealant prevents any further moisture from entering the cavity.

When you discover condensation inside double glazing, it is because the butyl seal has broken down which in turn has allowed moisture to seep back into the cavity it is probebly a very small amount, however when the sun shines on the window it heats the moisture turning in to steam and it grows daily.

The alternative to repairing a double glazing unit is to simply replace it, it is a far cleaner and safer way of curing any condensation issues. Replacement double glazed units are made differently now than they were previously, for example:

In conclusion the question is not How to get rid of condensation in double glazing? but why would you. In my opinion unless you have a full house of failed double glazing it doesn't make sense to pay as much for a repair as it is for a brand new double glazed unit fitted by a time served professional glazier.

Specialising in uPVC door and window repairs in South Durham, we carry a large stock of uPVC door locks, handles and associated hardware, We also have stock of window locks and hardware. If you have misted double glazing we can replace them quickly and efficiently.

Lock Snapping – How to keep your home secure

3 Ways To Fix Your Draughty Windows

Who repairs Safestyle windows in Darlington

Making The Most Of French Doors